For emergencies call us anytime! 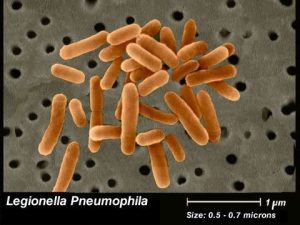 Legionella pneumophila can cause pneumonia.

Ice machines, commonly used in hospitals, clinics, restaurants and hotels, pose health risks. A series of scientific studies identified ice machines as a source of waterborne bacteria such as Legionella and Pseudomonas (causative bacteria for Legionnaires Disease and Pneumonia, respectively.)

Various Bacteria Can Lead to Illnesses

Since then, additional research has identified a variety of bacterial strains, all of which can lead to respiratory illnesses, some of which are fatal.  Research described in the American Journal of Infection Control noted the variety of bacterial threats.  A cold hard menace: A contaminated ice machine as a potential source for transmission of carbapenem-resistant Acinetobacter baumannii.  Kanwar A, Domitrovic TN, Koganti S, Fuldauer P, Cadnum JL, Bonomo RA, Donskey CJ. Am J Infect Control. 2017 Nov 1;45(11):1273-1275. doi: 10.1016/j.ajic.2017.05.007. Epub 2017 Jun 15.

Who is at Risk?

A method once thought to be effective in preventing microbial outbreaks initiated by water used in ice machines is carbon. Carbon filtering is a method of filtering that uses a bed of activated carbon (AC) to remove impurities and odors from a fluid using adsorption.

By trapping bacteria in a sealed filter, water is protected. Potential disease-causing bacteria do not end up in ice or water vapor that may emit from an ice machine.

A complete line of InLine Filters for use with ice machines can be found at:
https://aquamedix.net/dental-equipment-ice-machines-inline-system

STATES REOPENING FOR BUSINESS AFTER COVID-19 PANDEMIC SHUT DOWN: IS YOUR WATER SAFE?
April 29, 2020

After Coronavirus, Another Danger Awaits
April 21, 2020